Many years ago (6 to be exact,) me and my friends decided to do one thing we never thought we’d be able to do. We set out on a quest to traverse the mountains of Talamban and Budlaan in order to reach San Pedro Calungsod Peak in Barangay Sirao. This little misadventure of ours was documented in this blog. Hehe.

Anyways, if you’ve read that entry, you will know exactly what we went through to get to our ultimate destination. Some of you might think that we’re a bunch of wussies (in fairness we really were because we were inexperienced. :D) but with all the wrong turns and unexpected troubles we met along the way, plus that final descent that almost made me want to quit, I just think that that was one for the books.

So, if you check that blog entry, you will see this photo: 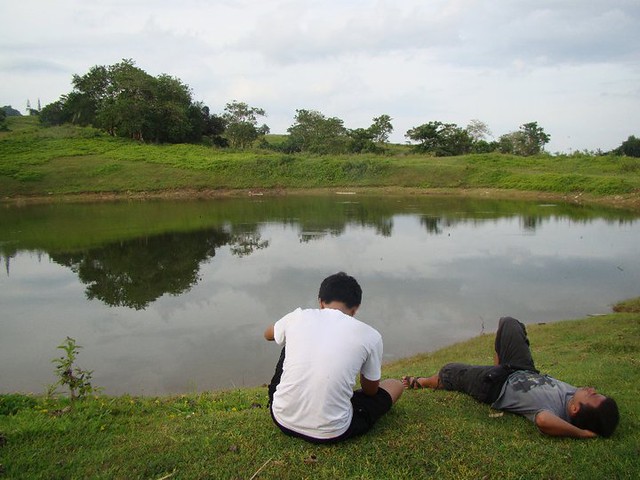 That’s me and Redjie during one of our final stops before we finally reached San Pedro Calungsod Peak.

See that lake in front of us? Yes, my dear friends. That right there is the exact same lake that has now become a social media superstar.

That same lake played a key role in the creation of the Tieza Botanical Garden.

Apparently, some locals decided to plant some Celocia flowers around the lake (if you remember the Celosia fields of Barangay Sirao also broke the local internet months ago) and people thought it looked really cool. Next thing we know, hordes are flocking towards this sleepy little community to take those much-needed selfies and groufie. 🙂

Me recreating my 2011 pose in the exact same spot.

In case you’re wondering, Tieza does mean something. It stands for Tourism Infrastructure and Enterprise Zone Authority.

The lake is located near the foot of San Pedro Calungsod Peak. And I remember passing by this concrete foot path to get to the peak.

The lake as seen from one of the surrounding hills. The lake used to be a hazard (obstacle) in the now-defunct Kan-Irag Golf Course.

Aside from the Celosia flower, other species of blooms can also be found in the area. These purple flowers, for example, look really gorgeous.

If you’re looking for the next big tourist destination in Cebu for all your selfie and groufie needs, then the Tieza Botanical Garden is definitely it. Do give it a visit!

And as always, please take care of the flowers, don’t leave any trash, and donate to the local caretakers.

View all posts by leylander →

Buhisan, Cebu: One With Nature

3 thoughts on “A Return to Tieza Botanical Garden”

Dayon Bai! Welcome to My Cebu Photo Blog. The photos you find here are mine. To purchase un-watermarked images, please contact me. Thanks!

In Photos: My First Time at the Cebu Safari & Adventure Park

I Finally Visited the Anjo World Theme Park in Minglanilla!