After leaving the Capilla Santa Ana compound in Toledo City, I decided to continue driving towards the town of PInamungajan. Since it was only three in the afternoon, my plan was to keep driving until I reach Aloguinsan, take the road towards Mantalongon in Barili, exit in Carcar, and then head back to Cebu city.

Well, I guess it’s pretty obvious that that initial plan never saw the light of day. Let’s just say that I saw something really interesting along the way.

Apparently, while I wasn’t looking (seriously, the last time I traveled to this part of Cebu was probably more than a year ago,) the local government of the town of Pinamungajan got really busy. Instead of leaving a piece of property unattended and unused, they successfully transformed into a public beach!

The Pinamungajan (or Pinamungahan) Public Beach is only a few minutes away from the city of Toledo. And you might not know this, but it happens to be one of my most favorite spots in Southwest Cebu. If you remember my Toledo City trip many years ago to attend an event by Haojue, this was the exact same spot where I took a quick pause during my test drive.

Here is a photo of the Haojue motorcycle I test-drove in 2013 at the beach which is now known as Pinamungajan Public Beach. 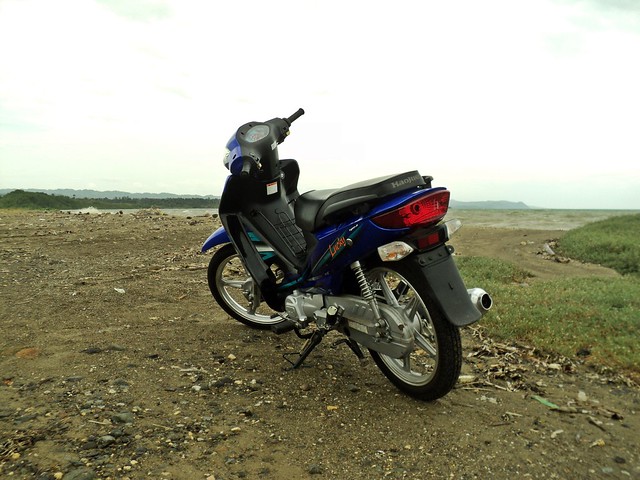 And yes, my dear friends. The beach looked like this 4 years ago. 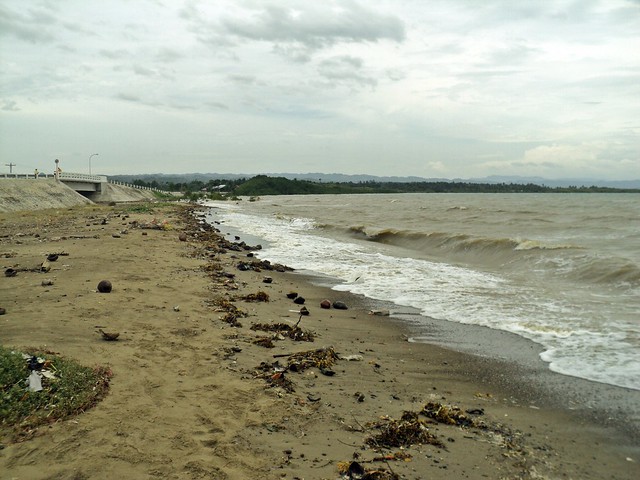 Now, it not only looks a lot cleaner, it also seems a whole lot safer. Don’t you agree?

And apparently, Pinamungajan has other hidden wonders we didn’t know about. They have the Campalabo Sandbar and Marine Sanctuary (which looks gorgeous in the photos,) several caves, the first wave pool in Cebu, and even a waterfall! I seriously didn’t know they had all these nice things!

Several structures can now be seen in the area. They have a big restaurant, several floating cottages, and even a videoke joint.

Since it was already several minutes after 3, I went to a sari-sari store nearby and bought a soda and some chips. Then, I took out my motorcycle sun cover and turned it into an instant picnic mat! Voila!

After finishing my snacks, I went into the water for a quick swim (of course!)

Satchmo, however, had to stay dry because he wasn’t feeling very well.

After changing into a different shirt, I decided to check out the restaurant in the area. The restaurant at the end of the stretch was called Bugsay Resto Grill. Apparently, it is very popular among locals especially at night. From the looks of it, live acoustic performances can be seen here at night.

And aside from the restaurant’s dining area at the beach, the restaurant has more tables and chairs. That is, if you have enough energy to cross this very long walkway.

View of the dining area at the beach as seen from the wooden walkway.

The huts on stilts located several hundreds of meters from land. Looks exciting.

After taking several photos, I went back to my picnic mat on the beach and spent the rest of the afternoon listening to music and lying on the mat.

By 6 pm, the sun had completely set and it was already dark. The place however, was only starting to get busy. Basing solely on the number of local vehicles in the parking lot, I think it is safe to say that Pinamungajanons love their new public beach.

Have you been to Pinamungajan’s Public Beach and the Bugsay Resto Grill? What do you think of these developments in Pinamungajan? Let us know in the comments below!

View all posts by leylander →

In Love With Argao: A Closer Look at Cebu’s Torta Capital

3 thoughts on “Waiting for Sunset at Pinamungajan’s Public Beach”

Dayon Bai! Welcome to My Cebu Photo Blog. The photos you find here are mine. To purchase un-watermarked images, please contact me. Thanks!

La Vie in the Sky: A Chill (and Quick) Getaway

An Unplanned Photo Shoot at the Ka-Tilong Sunflower Farm